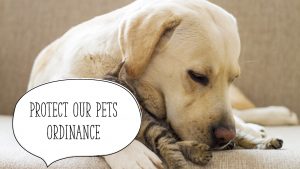 City Commissioners discussed and heard a first reading of a potential ordinance that would eliminate the ability for property owners to keep pets on vacant lots within the City during Monday’s regular meeting.

The Protect Our Pets Ordinance would require that habitable structures with active utility service be present on a lot for pets to be kept on the property. If property owners had multiple lots and wanted to keep pets on a lot separate from the residence, they would have to have the lots legally combined first.

The ordinance was presented as a first reading without action to allow time for public feedback, with the issue to likely be considered for potential adoption during the next regular commission meeting in April.

“This pet ordinance is the first step in a potential multi-step process to help clean up vacant lots in the city,” Assistant City Manager Joe Warren said. “It just so happens that we can also help address pet safety at the same time, and that gives this specific ordinance added urgency.”

In other action Monday, commissioners approved the use of a property tax exemption as an economic development tool for a $16 million redevelopment project by MGP Ingredients. The project will help expand the food ingredients line for the company, and will make use of the former Inclusion Technologies building in the 1100 block of Main Street. The agreement gives the company a 100% property tax exemption on the land and associated buildings for 10 years.

Commissioners also approved the sale of General Obligation Bonds to fund the Arbor Lane infrastructure build out in Brookdale Estates. The bond went through the bidding process earlier Monday, with the winning bid going to Central States Capital, with a true interest rate of 2.4979%. There were four firms that submitted bids. The bonds cover the $1.27 million it cost for the infrastructure build out of the new housing development, which will be repaid by special assessments placed on each of the 48 lots being developed. The bonds are for 15 years.

Commissioners also approved a $281,000 project at the Water Treatment Plant, which is designed to repair leaks in the settling basin at the facility.

Interim City Manager Justin Pregont also presented a report to commissioners on the 2021 Community Survey, which was conducted in December.

Commissioners approved occupational licenses for Monte Casino and the American Legion, and also approved an additional $5,000 to the 500-600 Commercial Street Façade Grant Program, which was originally budgeted for $25,000, but received $30,000 in applications.

The next regular city commission meeting is scheduled for 4:30 p.m. on Monday, April 4, in the commission room.