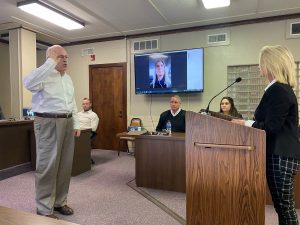 Retired Benedictine head football coach Larry Wilcox was selected to fill the open city commission seat during Tuesday’s regular meeting. Wilcox was picked from the list of seven candidates and will serve the remainder of the term vacated when Vice-Mayor J. David Farris died unexpectedly in late January.

Wilcox was joined by Charo Kelley, Dr. Robert Fast, Julie Ferraro, Luke Jesnowski, Jay Robinson and Roger Denton as the seven who submitted letters of interest to fill the seat. Wilcox and Kelley each received two votes from sitting commissioners, which meant that by ordinance City Attorney Bob Campbell was responsible for casting the tiebreaking vote.

Wilcox was sworn in immediately after the commissioner selection process and took his seat on the dais with the other commissioners. The term will run until December of 2023.

In other business Tuesday, commissioners selected Lisa Moody to serve as Vice-Mayor; heard an update to the E-Community Loan Program from Interim City Manager Justin Pregont; agreed to fill the gap for funding Northeast Kansas Enterprise Facilitation (NEKEF) for economic development/small business support services that was created when the Atchison County Commission withdrew its funding for the organization; approved Community Development records retention guidelines; approved a $70,000 rehabilitation project for the wastewater lift station at 17th and Harper streets; approved an agreement with the State Department of Children and Families for an emergency water payment assistance program; and approved the use of funds for the Façade Grant Program for potential use throughout the downtown district.

At the beginning of the meeting Mayor Abby Bartlett read a proclamation recognizing February as Black History Month in Atchison.

The second regular meeting of this month was held on Tuesday because Monday was President’s Day.

The next regular city commission meeting is scheduled for 4:30 p.m. on Monday, March 7, in the commission room.