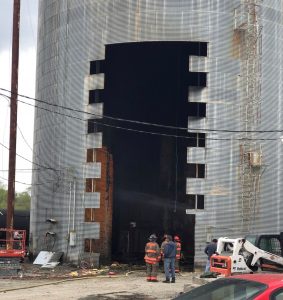 Fire crews were called to 1629 US Hwy 59 for a report of a  fire. When they arrived, they found insulation around a grain bin on fire. The fire was quickly extinguished, and the cause was determined to be from a contractor using a cutting torch to remove the grain storage bin when the insulation ignited. Heave black smoke could be seen coming from the facility before firefighters arrived and extinguished the blaze. No injuries or major losses were reported from the fire.