The resolution calls for a special ballot referendum to be scheduled for Thursday, July 14. If approved, the sales tax would go into effect on January 1, 2023, and would sunset on December 31, 2042.

Commissioners voted 4-1 to pass the resolution, with Commissioner Larry Wilcox opposed after concerned resident Derek Franklin asked the commission to postpone action. Wilcox commented that he was not opposed to the referendum, but that he did not feel that delaying action would do any harm.

After approving the referendum, commissioners unanimously approved another resolution that allocated any future revenue from the tax with 75% going toward transportation infrastructure – streets, curbs, sidewalks, and alleys – and the other 25% going toward property tax relief for city residents.

If passed, the tax would provide about three times the revenue for streets as is currently allocated, allowing for potential streets project each year, instead of once every three years. The revenue would also allow the City to discontinue the practice of debt financing streets maintenance projects through General Obligation Bonds.

Approval of the referendum would also allow the City to lower the amount of tax collected via property taxes by about 17%.

During the meeting, Assistant City Manager Joe Warren presented that during the 2021 Community Survey, only 21% of respondents were satisfied with the streets and sidewalks overall, and respondents supported a new tax to fund streets and street infrastructure 45% to only 32% opposed. Residents also identified streets as the second most important City service, behind police protection.

High property taxes were identified as having the second highest impact on improving quality of life by survey respondents, behind only economic development.

The special meeting was called to allow enough time for the special ballot referendum to take place before the July 15 deadline that cities must turn in Revenue Neutral Rate intentions to the County Clerk for 2023 property taxes.

There will be no regular meeting on Monday, May 16 as multiple commissioners are unavailable that day. The next regular city commission meeting scheduled for 4:30 p.m. on Monday, June 6, in the commission room.

FROM THE NEWS ROOM 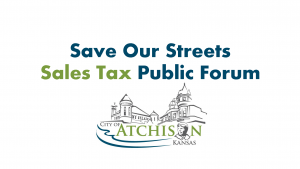 The video from the Save Our Streets Sales Tax Forum on June 14 is live: The special ballot question will be put to city voters on Thursday, July 14. Advanced voting is available at the Atchison County Courthouse. 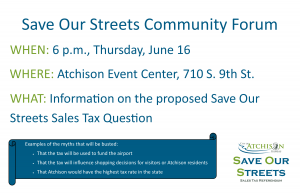 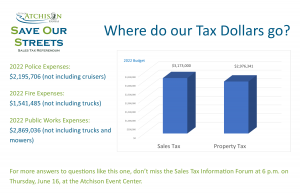 With the Save Our Streets Sales Tax Question by special ballot on Thursday, July 14, there has been some question as to where current City property and sales taxes go. The short answer is Police, Fire and Public Works, which make up the majority of the city budget, cost more 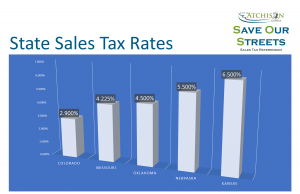 If voters approve the SOS – Save Our Streets Sales Tax Referendum in July, that would lead to a lowering of City property taxes (that Resolution has already been approved by the City Commission in case the sales tax question is approved). The City portion of property tax bills would 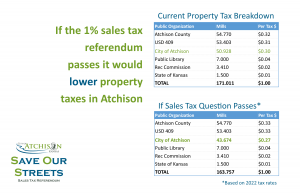 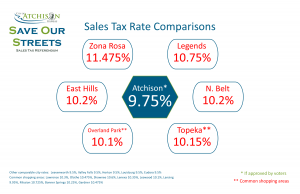